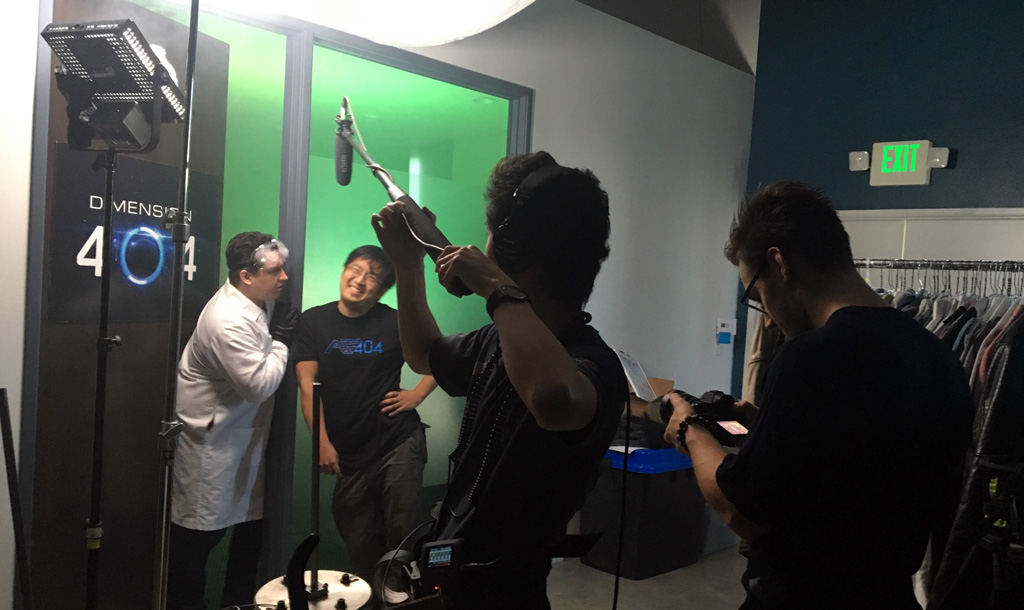 NOTE: If you haven’t seen it, we made a video too! Click here to check it out!

Been awhile since an update, hasn’t it?

This last year has been a whirlwind of trying to run this weird hybrid production company/online studio thing, all while experiencing a lot of things I never expected when I first decided that I liked movies and wanted to become a filmmaker. We raised a small round of investment. We had a board meeting. I learned what a “pro forma cap table” is. We hired people. We fired people. We shot the most ambitious project we’ve ever undertaken.

In short, we’ve been busy doing our best to stay afloat while making the most exciting projects we’ve ever had, all while tackling all the challenges of running a small business. It’s been equal parts terrifying and exhilarating.

Let’s start with the big project we’ve busy with – Dimension 404. It’s coming out in early 2017, (official release date TBD) and is a six-episode sci-fi anthology show, which means every episode is a different story and cast (think Twilight Zone or Black Mirror). One of the benefits of doing an anthology series is that it means you don’t need to commit actors to a month long shoot schedule. Instead, you’re able to pull talent from folks who might not otherwise be available due to TV or feature film commitments.

We’re really excited and proud of our cast for Dimension 404 – the series stars Patton Oswalt, Lea Michelle, Megan Mulally, Constance Wu, Joel McHale (who had a brief cameo with us previously as the missing POTUS in Season 3 of VGHS), just to name a few. You can see the whole cast list here. Dez Dolly acts as showrunner (previously, he directed the oft-Facebook freebooted Every 90s Commercial, Ever), while Matt and myself directed two of the six episodes over the course of a forty-two day shoot earlier this year (the longest we’ve ever done!).

Dimension 404 is part of the deal we signed a couple years back with Lionsgate. It’ll be coming out on Hulu domestically, and will be available elsewhere internationally once the show is finished. This is the nature of how television travels around the world – the show itself gets sold to various international territories. Our previous Hulu show, RocketJump: The Show, for example, showed up in various regional iTunes stores, and on television in places like Australia. So if you’re overseas, you will be able to see the show, but the machinations of sales and broadcast are out of our hands – we’ll be updating RocketJump.com with territories as they become known.

The other major project we’re working on is the follow-up to Video Game High School, which we’re calling VGHS: Knights of the Realm. There are no plans for a live-action season four, or a “Video Game University.” (Besides, true pros in the VGHS universe never go to college, they skip to the pros right out of high school like international soccer stars.) We told the story we wanted to tell with Brian, Jenny, Ted, and Ki, and will be continuing the series as an animated show, telling a new story with a new cast of characters, and focussing on a MOBA game entitled Knights of the Realm. The setting is still the hallowed halls of VGHS, which means there’ll still be some characters you might recognize from the first three seasons, but the future of the series lies in the animated realm.

Will Campos, writer on the original series, is taking the lead on this one as showrunner. He and Matt have been busy recently finishing up a pilot script and pitching the show to various networks. The universe we envisioned truly comes to life when we free ourselves from the constraints of live action photography, and the direction of the story has everyone here at RocketJump bursting with excitement. We’re working closely with a well known animation studio here in town and will have some more substantive news shortly!

On a brief side note – Johanna Braddy, who played Jenny in VGHS, can be seen on ABC’s Quantico, as well as season one of Showtime’s UnREAL!

We’ve also been immensely proud of the RocketJump Film School and their content, which was an educational channel we started up with the goal of teaching filmmaking techniques to all skill levels. They’ve nearly hit the 300k subscriber mark and have put out over 144 videos in the past year, including a bona fide viral visual essay entitled “Why CG Sucks (Except it Doesn’t).” It’s all seriously great stuff, but some of my favorites include Cuts and Transitions 101, a visual essay Joey put together on editing fundamentals, and Harnessing the Sun, which features VGHS Director of Photography explaining how to use the universe’s best light source.

This last quarter, they’ve started to delve into core fundamentals, starting with lighting for cinematography. It’s important to note that these principals apply to all filmmaking, whether you’re making a narrative short, or just adding to your Snapchat story – you can make stuff look great and RocketJump Film School can help.

In addition to YouTube videos, the RJFS streams live for free on YouTube every Thursday 4 PST at youtube.com/rjfilmschool. If you have any interest in filmmaking, if you’ve ever watched a special feature on a DVD (remember those?), then check out what they’ve been up to!

Out of everything we’ve been working on, we’ve probably undergone the greatest change in thinking and approach this year when it comes to shorts on the RocketJump main channel.

To go back a bit, when we started back in 2010, we were putting up a YouTube video every week. By a couple years in, nearly all of these videos were brand deals and brand focussed. A big part of that is that style of video, short films with visual effects, are not cheap and easy to make…

Well – that’s not entirely true. Because as we did in our first couple years of existence, you can make that stuff cheaply – but only by dedicating 100% of your time and resources into doing it. The side effect of that, for better or worse, is you pull an inordinate amount of all nighters, and you literally have no time to do anything else. During the run of VGHS, we needed to shift focus on a channel-wide level to VGHS, shifting back to the shorts only after we were finished with the season.

One way to support the production of shorts is to have brands pay for it. In the past, we’ve had varying levels of success with this. I point to videos like our recent video Hero of the Storm, as examples of videos that had a brand message integrated but still allowed us to create something fun and awesome. I can also point to a lot of videos we’ve done that does brand integration pretty poorly (weirdly enough, mostly around mobile games – go figure). In short – branded integrations can be hit or miss, and even veterans like ourselves, who’ve done this as long as we have, still aren’t rocking a 100% hit rate.

Another method to make shorts came at the end of last year, when we managed to judo our way into making shorts by doing RocketJump: The Show – a docu-reality series on Hulu centered around the creation of the shorts themselves. This yielded, at least in my opinion, some of the best shorts we’ve ever done – Keep off the Grass, as the final entry in the Clint vs. Freddie fighting series, and Tip Jar, a silent action film starring Josh Blaylock, are two of my favorites.

Earlier this year, we convened a “shorts team” consisting of friends of the RocketJump family – Ashly and Anthony Burch, two tremendously talented writers and actors from their series Hey Ash, Whatcha Playin’, Jimmy Wong, creator of the Feast of Fiction YouTube Channel as well as being Ted from VGHS, Ellary Porterfield, aka Ki from VGHS, and Clinton Jones, a frequent collaborator and my mortal hand-to-hand combat archnemesis.

They wrote, directed, shot, and starred in 11 shorts, which we’ve compiled in a playlist along with the rest of our shorts.

As of Speed Enforced by Aircraft, that team has moved on to other projects. In short, the economics behind YouTube shorts forced us to reevaluate what we want to do with the YouTube channel.

Over the course of the last six years, YouTube’s evolved quite a bit. I felt old for the first time when I saw, a few weeks back, the top video on Reddit was from a user named iDubbzTV (who aside from being someone I had never heard of until that point, is the first person I’ve seen rock high framerate video). The comment section was filled with callouts and references to tomes of history and drama that had completely passed me by. So for those of you who are wondering, it takes about five years to go from knowing everyone to being completely out of touch when it comes to the world of online video.

So while the focus on longer, large-scale projects comprises a big part of what we do at RocketJump now, we’re not letting go of shorts entirely. Clint and myself will continue working on shorts here moving forward. We won’t be releasing on a weekly schedule, but hopefully this allows us to spend the time to make something unique and interesting. A recent example of this was a short we put out for Halloween – Harold, which was an exercise in horror and tension, directed by Jon Salmon (DP of VGHS) and RJ Film School’s Joey Scoma.

Also, after doing some investigation into how the YouTube algorithm sends out videos to subscribers, we are reverting back to putting our BTS and our sillier lifestyle videos on RocketJump2. We had previously believed putting everything on one channel would go towards unifying the audiences, but due to how videos get pushed out to subscribers, it ended up being detrimental to us. So main channel will continue to have shorts, while we aim to have a bit more consistent frequency on RocketJump2.

This last year was all about experimentation. In addition to the videos the shorts team did, we put the shorts from our show RocketJump: The Show up, we put a variety of behind-the-scenes and lifestyle content alongside those shorts, and we even tried out some of our weirder, out-of-the-box ideas. Some experiments worked. Some definitely didn’t.

But despite pressure from those in our audience wanting us to “go back to the old videos,” I think it’s important that we stick to the principles of what got us started on YouTube in the first place. It’s not about trying to generate as many views as possible (although cut me some slack – nothing in the world is funnier to me than a bait-and-switch clickbait title). If our goal was viewcount, I’m afraid it would lead us down a path of content that would not be creatively fulfilling for anyone here, and would take focus away from what we really want to do – which is creating what genuinely excites us and (doing our best!) to tell great stories.

To stay up to date on what’s happening, check out our Facebook and Twitter. You can see everything we do at RocketJump.com, and on our YouTube Channels, as well as Facebook Video. The hub for the film school is at school.rocketjump.com, and if you have the urge for merch, hit up shop.rocketjump.com

Thanks, as always, for reading and watching, and here’s to what lies ahead!