5. This is the internet – Time moves faster.

Looking at a two year contract? Two years is a lifetime on the internet. Two years ago, we had the Old Spice guy ads. Two years ago YouTube looked like this: 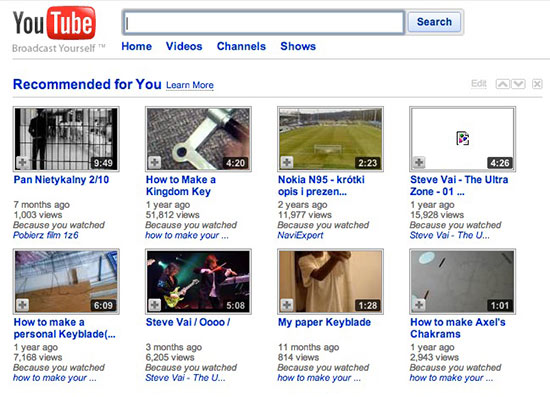 Two years ago the “freddiew” channel didn’t even exist. In two years we went from complete unknowns to a top 10 YouTube channel. A lot can happen in two years.

As a starting point you should be looking at a contract term that lasts from six months to a year, depending on the deal. It should go without saying but never take a lifetime contract.

One note: the reason they ask for a long term is so they can reasonably sell you to their advertisers throughout the year. Q4 content gets sold early – it does them no good to say “Hey, we have this guy” and have you potentially drop out before the time comes to execute. That’s fair – whatever you sign should take you through the end of the year at least.

But consider this – if you ask a network, they’re tell you that everyone is happy and everyone loves being part of that network. If they’re so confident that you’ll be in that same boat, you’ll be happy in 6 months, so you’ll just renew right then and there no questions asked.

Yet somehow, six months is not ok. If they’re so confident that you’ll be a part of their network, why do they seem to assume you’ll abandon them the moment your contract is done?

What’s baffling is many networks seem to be hell bent on holding their creators to their contract terms. It does nobody any good to do this – if someone hates working under a network, what do you think the quality of their content will be if they’re forced to continue churning it out for another few months?

6. The entertainment industry has guidelines for percentages. Use them as starting points.

While the whole business of online video and networks is relatively new, the business of “organizations taking a cut from talent” is most certainly not.

In general, in the world of entertainment, agents take 10%-15% and managers take 10%-15%. So why should we treat what we do as any different? These entities often are similar to YouTube networks in that both are looking to find you work, so anything more than that and there better be a very good reason for it. They need to be really bringing something to the table.

What they bring to the table depends strongly on what you actually need. Brandon and I, for example, don’t really need much help in the VFX department, but maybe they’ll offer you things you do need – maybe you could use a team of cameramen, or actors, or writers. Whatever they offer, make sure it’s better than what you could do yourself. Otherwise, you’re just taking a step backward.

Always weigh the cost/benefit of letting a network step in and fill a production need, or simply using money to fill that need yourself. In the end, you don’t want to become so reliant on the network to be providing you with cameras and shooters and locations that, if time comes you’re no longer happy, you’ll be unable to leave them because so much of your business’ infrastructure is tied in with them.

One way to incentivize them to work harder for you might be to have different percentage tiers depending on how much work they bring you. That way, there will be some motivation on their part to bring you additional of work because that’ll allow them to take a bigger cut, which is totally fair. Sales Agents for feature films will sometimes do something like this – their rake might enter into a higher percentage tier after they’ve sold a certain amount.

Remember – there aren’t any rules or any “right” way to do this. If it makes sense, odds are it’ll probably work.

120 responses to “YouTube Networks: 7 Things You Need to Know”